The Most Beautiful Buildings From Around The World


These are the world’s most beautiful buildings? Are you kidding?
A hundred years ago, naming the world’s most beautiful buildings was easy: the Parthenon. Sure. The Taj Mahal. Absolutely. Hagia Sophia. No argument. But now, in part because the whole notion was chewed up and spit out by those troublemaking Modernists, we’re just learning to think about architecture in terms of beauty again. It’s open season.
Certain themes are evident in our choices of the world’s most beautiful buildings. We love buildings surrounded by water; the interaction between water and daylight is always magical. (Why do you think the Lincoln Memorial has a reflecting pool at its doorstep?) And we are head over heels for flamboyant uses of pattern and color. The Netherlands Institute for Sound and Vision, for example, is positively psychedelic.
So are we consistent? Nope. But however capricious our choices may seem, we don’t take beauty lightly. After all, the ongoing search for beauty is what travel is all about. It’s certainly the best reason we know to leave the house. 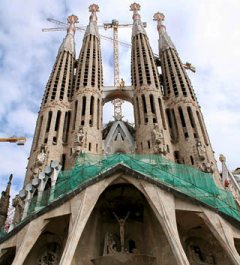 Visionary Catalan architect Antoni Gaudí spent more than 40 years of his life on this glorious, chaotically complex, and still unfinished Gothic-Art Nouveau cathedral. After his untimely death in 1926 (he was hit by a streetcar), his associates continued his sculptural masterwork, and despite the fact that the original drawings were destroyed during the Spanish Civil War, construction continues today. Completion is scheduled for sometime between 2017 and 2026.
Authenticity Alert: The east-facing Nativity façade was the only one completed by Gaudí himself. 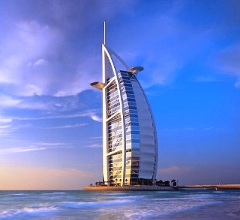 This 60-story sail-shaped hotel, which sits on its own private island, was designed to be a national icon. But the interior is where the beauty lies: a nearly 600-foot-tall atrium—the world’s tallest. The undersides of tier after tier of semicircular balconies reveal a spectrum of colors. And the tower’s powerful diagonal braces, like the flying buttresses of the past, inspire awe.
Insider Tip: Non-guests can gain access to the Burj Al Arab’s private island by booking a meal at one of its restaurants; try afternoon tea at the Skyview Bar or a buffet lunch at Junsui. 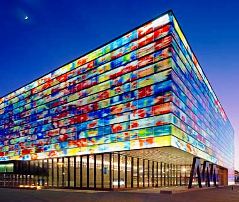 Institute for Sound and Vision
The work of Jaap Drupsteen, the graphic artist responsible for the building-size media collage, used to be everywhere in the Netherlands. This building is his comeback. Along with architecture firm Neutelings Riedijk, he covered the façade of the massive media archive and museum with images from Dutch television, abstracted into a giant four-sided mural and baked directly onto cast glass. The effect is stunning inside and out.
Experiential Beauty: Tour the history of Dutch broadcasting, or simply gaze up at the stained glass from a table at the atrium’s Grand Café. 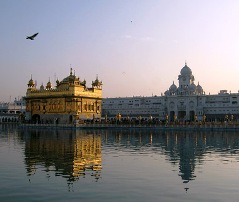 This most sacred Sikh shrine sits in the middle of what was once a wooded lake. The Buddha came here to meditate, and so did Guru Nanak, the founder of the Sikh faith, some 2,000 years later. The Harimandir, or “Temple of God,” was built and destroyed many times before the current version was erected in the late 1700s. The radiance of this gilded building, a mixture of Hindu and Muslim architectural styles, is amplified by reflections in the surrounding water and the devotional music that emanates from the temple day and night.
Night Owls Welcome: The temple is open 20 hours a day, from 6 a.m. to 2 a.m. daily, and is illuminated (and especially lovely) at night.
National Congress Hall 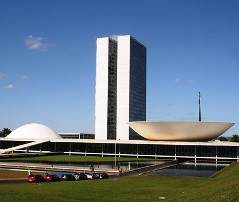 Brasilia probably works better as a Modernist sculpture garden than as a city, but if there is one piece of it that best represents the whole, it’s Congress Hall. Architect Oscar Niemeyer’s colonnaded marvel, with its grand sci-fi entrance ramp, skinny twin towers, and two bowl-shaped meeting halls (one for the Chamber of Deputies and one for the Federal Senate), treats the business of government as a monumental work of art.
Not Just Skin Deep: Go inside and check out the Green Hall (named for the color of the carpet and the Brazilian flag), with its collection of paintings, sculptures, and decorative screens by renowned Brazilian artists. 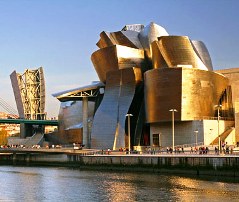 The Frank Gehry–designed, titanium-clad phenomenon that upstaged the Guggenheim’s Frank Lloyd Wright transformed the way the world understands architecture, art museums, and the strategies for reviving depressed industrial cities. Today, the shiny undulating museum doesn’t look as shocking as it once did, but it does embody a certain kind of late 20th-century thinking—the thrill of formal complexity and high art.
Small Is Beautiful: Alternatively, we could make a case for Frank Gehry’s first major building, the diminutive white Vitra Museum in Weil am Rhein, Germany. 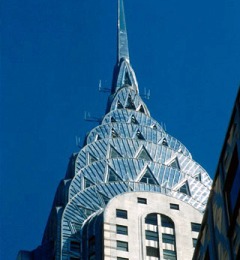 Designed by architect William van Alen, the Chrysler’s shiny, filigreed Art Deco spire is the most indispensable piece of the New York City skyline, perfectly balancing the primal thrust of the classic American skyscraper with the desire for a little bling. (It was the world’s tallest for less than a year in 1931 before that zeppelin-masted tower eight blocks south took the spotlight.) Day or night, its stainless-steel crown still dazzles like nothing else.
Icon Alert: This is possibly the only building in the world that is decorated with automotive hood ornaments: the big eagles on the 61st floor were copied from a 1929 Chrysler. 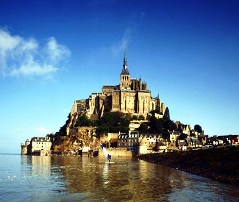 Though not as lavish as some landlocked cathedrals, this abbey is certainly the most dramatically situated, enjoying prime real estate just off the coast of Normandy. The first abbey was built in 709, with construction continuing for hundreds of years. Spurning the safety of the causeway (built in 1879 and currently being reconstructed), pilgrims still scamper across the sands at low tide to reach the Mont, and risk being overtaken by fast-moving waters.
Dining Tip: Try the agneau de pré-salé, a local specialty made from meat from the lambs that graze on the nearby salt meadows.
Email Post
Labels: architecture buildings around the world great arcitechture most beautiful buildings