Twas the night before remodeling, when all through the kitchen
not a handyman was stirring, no hammers were twitchin'.
The plastic wrap was hung all around the room with care
in homes that AK soon would be there. 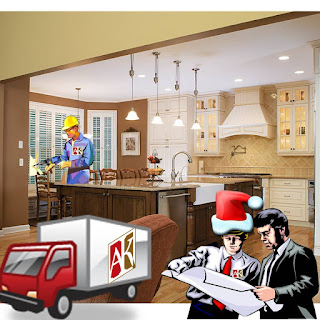 The children were nestled all snug in their beds
while visions of warming drawers danced in their heads.
And mama in her snuggie, and I in my cap,
had just settled down for our last dust free nap.

When out on the driveway there arose such a clatter
I sprang from my La-Z-Boy to see what was the matter.
Away to the window I staggered so sleepily
I lifted the miniblinds and gazed so dreamily.

The moon's reflection on the cold and wet asphalt
showed me a little old truck who'd just come to a halt.
When what to my wondering eyes should appear,
but a miniature AK logo that filled me with cheer!

With a little old driver, so lively and quick
he hopped from his truck and up the stairs with a kick.
More rapid than eagles his tools they came
and he whistled and shouted and called them by name.

"Now Hammer! Now Pliers! Now Sander and Mud Pan!
Now Plumb Bob! Now Hacksaw! Now Tape Measure and Caulk Gun!
From the top of the cabinets to the bottom of the baseboard!
Now Tear Away! Design Away! Build Away 'till all is restored!"

And then, in a twinkling, I heard in the kitchen
banging and knocking like an old fashioned cotton gin!
As I drew my head in, and was turning around
in the front door AK's Ed came with a bound!

He was dressed all in logo gear, from his head to his shoes,
and his eyes looked like he had not had a snooze.
The bundle of tools he had flung on his back,
and he looked like a remodeler ready to attack!

He spoke not a word, but went straight to his work
and tore out the whole kitchen like a builder gone beserk!
And laying a finger aside of his nose
and giving a nod a new kitchen he did compose!

The cabinets, all cherry, had pullouts and rollouts and storage a'plenty
and the additional cabinetry in doors numbered twenty!
Appliances in steel, countertops in granite
and so much technology it couldn't be from this planet!

He sprang to his truck, to his tools gave a whistle,
and away they all drove like a shot from a missile.
But I heard him exclaim, 'ere he drove out of view,
"Happy Renovating To All! And To All A Good Crew!"

Happy Holidays From AK!
A Crew You Can Trust!

Thanks for taking the time to leave us a comment! Please be sure to visit our website and let us know what you think: www.AKAtlanta.com